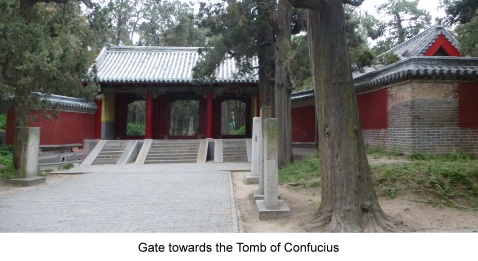 When leaving the passageway gate leading to the Tomb Yard of Confucius there is a building at the left (on the right on the picture). This building was called the Si Hall (思堂) and was built during the Eastern Han Dynasty[1] for the Kong family members’ to fast and change clothes three day before offering sacrifices to Confucius. 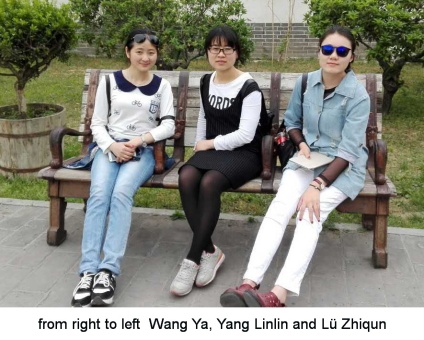 When I walked to the entrance of Si Hall it struck me that I was alone and that most of the people just went further on the main path. Just when I took a sort of selfie by using the self-timer of my camera three girls ( I should maybe say young woman) entered the gate and they looked astonished when they realized that I was taking a picture of myself in such an old fashioned manner. One of them proposed to take a picture of me with my camera and suggested that I should hug the tree! After some hesitation I finally agreed to such a 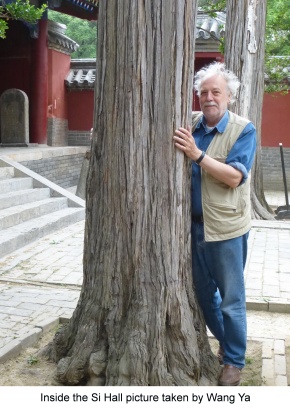 strange picture of me to be taken! This was the beginning of an interesting afternoon.

girls told me that they were studying at the Shandong Agricultural University (山东农业大学; Shāndōng Nóngyè Dàxué) which was established in 1906 and is located in Tài’ān (泰安;).  I was surprised by the way they could express themselves in English making the conversation more easily, now and then I could clarify something in Chinese.

After having answered some questions such as: why was I here in Qufu, where do you live etc  they left the Si Hall while I decided to stay a little longer to visit the place in more detail.

Walking back to the main path one of the girls asked if they could accompgny me to the exit of Kong Lin (in fact it is also the main entrance if one wished to visit only the Confucius Tomb Yard). I of course agreed and when arriving at the exit they asked me what I planned to do afterwards. My answer was very simple; I had no plans, I just wanted to discover the environment around Kong Lin and maybe thereafter going back to the Hotel. They said that it was only 4 pm and plenty of time to visit something else! After a short discussion amongst them they came up with a proposal to visit the  Confucius Six Arts City. I immedaitly accepted it, I didn’t know this place and it looked promissing. After a short taxi drive we arrived at the place. 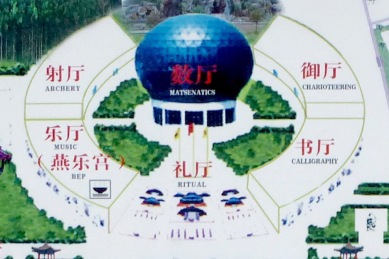 The full name “孔子六艺城孔子故里园导览图”can be translated as: “Confucius Six Arts City and Confucius’ hometown”. It is a theme museum park on Confucius and on the culture of State of Lu State[2] at the time of Confucius.

The museum park covers an area of 13ha. In the middle there is a  sphere-shaped building called the “Mathematics Hall” representing the mathematics or calculation rite. In this building, according to the Museum information, visitors should be able to use all kinds of electronic game machines to solve different mathematics puzzles except that the building was totally empty when I visited it! The other five arts are shown in buildings around the main one. Just in front is the Ritual area, clockwise the Music Hall, Archery Hall, Chariot Riding, Calligraphy (here called books hall (书厅). Inside the books hall there is a scene where Confucius is teaching to his 72 disciples. This is a very lively and impressive set-up. 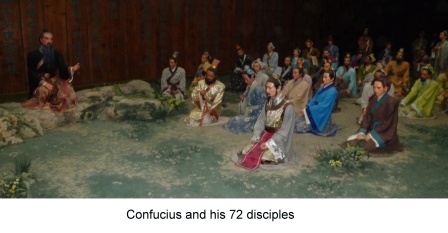 According to the great historian Sima Qian who lived some 300 years after Confucius only 72 out of thousands of Confucius’ students mastered his teaching. These 72 disciples practiced the Six Arts. Some of them are mentioned in the Analects of Confucius. Many of their biographies are recorded in Sima Qian’s Records of the Grand Historian (Tàishǐ gōng shu;太史公書), now usually known as the “The Scribe’s Records” ( Shǐjì 史記) which was finished around 94 BC.

When leaving the Books Hall it was raining cat and dogs we could not walk anymore around and decided to enter the Driving Chariots Hall. 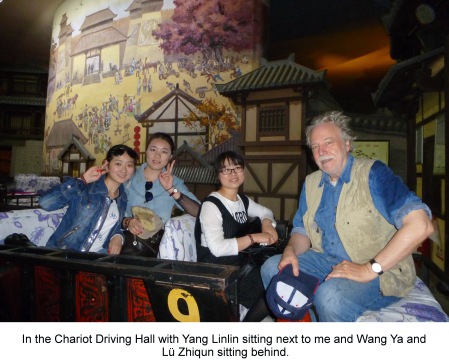 In this Hall you can board a small type of coal mine wagon which will drive you through landscapes and different places showing the ups and downs experienced by Confucius during his 14 years’ travelling in various states in the Spring and Autumn Period.[3]

The exhibit is difficult to follow without someone translating it in real time; luckily I had the three girls giving me very useful explanations.

“Music Hall” was already closed we missed thus the music and dance performance.

We had no time to visit in detail Confucius’ Village on the one hand because the museum was closing and the girls had to go back to Tài’ān.

[1] The Eastern Han (25 AD – 220 AD) was established by Liu Xiu, who became the Emperor Guangwu. The Capital Luoyang was located in the Henan Province.

[3] The Spring and Autumn period Chūnqiū Shídài (春秋时代;春秋時代) was a period in Chinese history from approximately 771 to 476 BC. The name stems from “Spring and Autumn Annals” Chūnqiū (春秋) one of the Five Classics of Chinese literature. The Annals is the official chronicle of the State of Lu, and covers a 241-year period from 722 to 481 BC. It is traditionally regarded as having been compiled by Confucius or most probably by Mencius.