After my lectures at the School of Telecommunications of the Hangzhou Dianzi University a graduate student Chen dingqiang陈定强 (Leo) and an undergraduate student Wang Ge王歌 (Alisa) suggested we should visit the West Lake.

The West Lake Xī hú (西湖) is famous in Chinese culture with a surface of approximatively 5.6 km². It has influenced poets and painters throughout Chinese history. Since 2011 it is on the list of the UNESCO World Heritage Sites.

We left the university by taxi heading to the West Lake, due to the heavy traffic; it took us a very long time before arriving.

At the arrival I said that I needed urgently something! Both students were somehow surprised that what I needed was an expresso! When leaving the taxi I had seen an expresso café and once there I invited them for an expresso: I think their first one in their live!

Feeling better after the expresso we started out journey by walking towards the Broken Bridge. 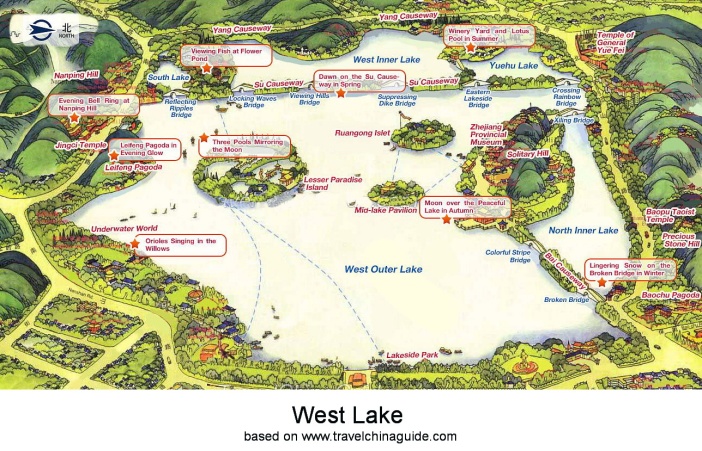 On our way there is a monument called “Farewell to Juyi the Poet-Governor” which represents the local people moved by saying farewell to their governor. I didn’t like the monument but it triggered my interest in Juyi. Leo and Wang Ge told me that he was a famous poet during 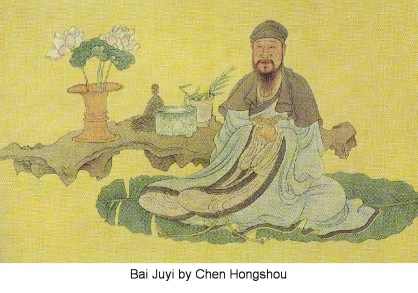 the Tang Dynasty one generation before well-known Poets such as Du Fu and Li Bai.

When back at the Hotel I made a search and found some interesting information on Juyi.

Bai Juyi was born in Xinzheng (772 – 846), Henan Province. He held several posts in the government but he had many enemies due to his outspoken character.He was banished from the court and took up duty as an official at Jiangzhou. Thereafter he was sent as Governor of Zhongzhou, a remote place in Sichuan.

When in 821 a new emperor Muzong started his reign he made suggestions to him for improving State affairs but he never received any answer. He concluded that “there is no use to save the world”, so he asked for being “sent away”, and was appointed as the Governor of Hangzhou. He arrived depressed in Hangzhou in 822. His mental state is reflected in his poem “Getting Up Late on a Boat”:

Retired from the court as a useless man,

In the court of patriots there are talents.

Better walk toward the Qiantang Lake,

Singing and drinking for several years.

Thanks to the scenery at the West Lake his depression faded away and he started to improve the surroundings of the Lake and devoted himself to the welfare of the local people. When in 824 his term as Governor came to an end he wrote “Farewell to the citizens” :

The elders have blocked the road.

Tears running on the faces.

The only thing left is the lake,

That can save my people from droughts.

Bai Juyi never came back to Hangzhou but he kept the West Lake in his heart.. “Remembering south of the river” which he wrote just before leaving reflects his feelings for Hangzhou.

The elders have blocked the road.

Tears running on the faces.

The only thing left is the lake,

That can save my people from droughts.

Admiring the picture taken by Alisa of the sunset at West Lake one easily understands the feelings of Bai Juyi!

We strolled further towards the Broken Bridge. When we arrived close to it Wang Ge told us the legend of the white snake.

“One day Lü Dongbin, one of the Eight Immortals, had disguised himself as a man selling tangyuan[1]  at the Broken Bridge (斷橋). A boy called许仙Xǔ Xiān buys some tangyuan from Lü Dongbin without knowing that they are actually immortality pills. He does not feel hungry for the next three days after eating them. When he goes back to see Lü Dongbin he carries him to the bridge, where he flips him upside down which causes him to vomit the tangyuan into the lake.

In the lake, there is a white snake spirit who has been practicing Taoist magical arts in the hope of becoming an immortal after centuries of training and cultivation. She eats the pills and gains 500 years’ worth of magical powers. She therefore feels grateful to Xu Xian and transforms into a woman; called Bái Sùzhēn (白素貞) and they fall in love and are eventually married.

One day a Buddhist monk called Fǎhǎi (法海) acts in such a way that Bai Suzhen reveals her true form as a large white snake. Hearing this Xu Xian is shocked to death!

Bai Suzhen succeeds to bring Xu Xian back to life and notwithstanding her true nature he is still in love with her. Bai Suzhen gives birth to their child called Xǔ Mèngjiāo (許夢蛟). But Fahai imprisons Bai Suzhen in a Pagoda.

According to one version Bai Suzhen is freed and lives happily together with her husband and son.”

The Broken Bridge, which is not at all broken, is the most well-known bridge of the West Lake and lies at the eastern end of the White Causeway.  There are many stories about the origin of the name some are saying that it was originally called “the Duan Family Bridge”. As the word “Duan” sounds the same as “Broken” in Chinese, the bridge is called “the Broken Bridge”.

But Wang Ge had a preference for another interpretation she told us that in winter when the snow covers the bridge and the sun is shining the snow in the middle part of the bridge melts away and seen from some distance it is as if the bridge is broken.

Every year lovers, old and young, are standing on the bridge wishing that their love would last for ever!

We continued walking even if the rain was falling. At the end of the path we found the tomb of Su XiaoXiao. 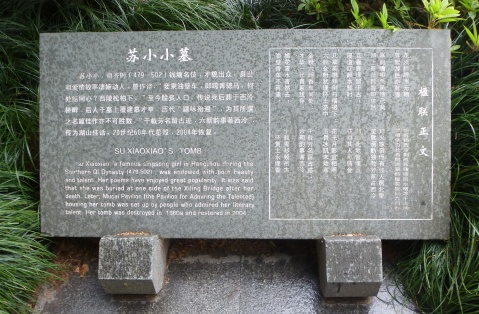 According to a legend, Su XiaoXiao met on the lakeshore, when she was sitting in her curtained chariot, a young man riding a horse. She fell in love but the young man disappeared and she died of a broken heart. In one of her poems she relates the event.

妾乘油壁车    I ride in a decorated carriage,

何处结同心    Where should we tie the knot for our heart

西陵松柏下    Under the Xiling pine and cypress.

It is said that she was buried on the shore of the West Lake maybe somewhere under the Xiling pine and Cypress. For more than thousand years the intangible tomb evoked fantasies of a spectral beauty haunting the lakeshore. Many visitors walked around the lake with a romantic feeling that Su Xiaoxioa was lying here somewhere.

Her life and poetry inspired many poets and she became a romantic heroine of Tang dynasty poets such as Bai Juyi.

But this comes to an end when in 1780, Emperor Qianlong’s instructed the construction of a stone tomb, with a stele “Tomb of Su Xiaoxiao of Qiantang”.

Since then her tomb was situated at the Xilin Bridge beside her beloved West Lake but it was destroyed during the Cultural Revolution maybe not on purpose but who knows as collateral damage of other destructions which were more in line with the Red Guards objectives.

In August 1966 local and non-Hangzhou Red Guards came at the West Lake and  ejected the philosopher Ma Yifu (馬一浮, 1883-1967) from the Jiang Villa (Jiang Zhuang 蔣莊) on the Su Causeway where is lived thanks to the Communist Party. He died shortly thereafter!

They subsequently destroyed other historic monuments of the West Lake in particular the Tomb of Yue Fei. Yue Fei (1103 – 1141) was famous general known for the wars during Song Dynasty (960 – 1279) against the Jin Dynasty (1115 – 1234). He was falsely accused and later secretly killed in jail. A few years later he was rehabilitated by Emperor Xiao Zong (1163 – 1189). The current tomb has been largely rebuilt in 1979.

We continued our walk crossing other bridges. There are six bridges on Su Causeway they all have a name. From South to North: the first one is called Reflecting the Waves Ying Bo (映波桥), the second Locking the Waves  Suo Lan (锁澜桥), the third Viewing Hills  (or Gaze in distance to the Mountains) Wang Shan (橋山望),  the fourth Suppressing Dike  Ya Ti (压堤桥), the fifth  Eastern Lake site (东浦桥) and finally the sixth Crossing the Rainbow Kua Hong (跨虹桥).

We had a short pause at the Wang San Bridge for pictures and some rest.

After several hours walking we were hungry and thirsty but we didn’t find any suitable place. After having crossed the Locking the Waves Bridge we decided to go back by boat to where we started our trip. The boat brought us first to the Three Pools Mirroring the Moon Island (三潭印月). After visiting the island we boarded again and arrived safely on the other side of the Lake.

In the meanwhile it was time for supper which we took in a lively restaurant with delicious food.

We went back to the hotel using the subway, easier and faster!

In the evening I found a poem of Juyi which reflected very well the mood in which I was.

In a hill temple in the moonlight searching for cassia buds,

In the State Pavilion, head on pillow, watching the tidal wave.

When will be the day that I shall roam again?

[1] Tangyuan or tāngyuán (汤圆; 湯圓) is food made of sticky rice flour mixed with a small amount of water to form balls and is then cooked and served in boiling water